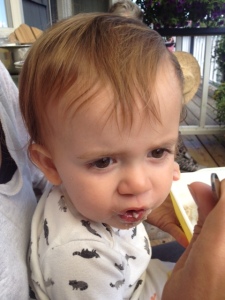 Our sweet little boy is all grown up. I haven’t been keeping up with the blog and the time away makes it even harder to come back. There have been too many milestones and it’s impossible to bring it all together. So what’s going on these days?

He’s standing and loving it. Seems very close to walking, but still needs to hold or lean against something. He loves playing games, even of his own creation. One of my favorites is when he alternates between crouch down and standing up to roar towards the sky. I of course join in and it goes on at least a dozen times before he moves on. He can say many words, including “mama” and “papa.” Being able to say those two words have proven to be bittersweet, as he can now vocalize his preference (hint: it’s not papa). Watermelon (his favorite thing) is “wawa,” banana is “nana,” bubbles is “buh-bol.”

He has 8 teeth, his hair is long, and his poop smells. He finds sneezes funny and he barks at dogs. Papa time is still the best and I dread the day is goes away.

We have spoiled him terribly by having him sleep with us and it’s catching up. Mama wants to start working again and doesn’t appreciate having her boob be a pacifier now that he’s getting enough real food during the day to no need night feedings. He’s currently very needy and is often times devastated to be put down on the floor. Transitioning to a part or full time job with be a very interesting step for Mama, both for her own lifestyle change and its impact on Baby. It’s starting to feel like the right time, however.

My weekdays are spent working somewhat long hours and being with the family. I then hope to have as low key a weekend as possible, but Mama has spent her week waiting for the weekend to do activities. Either way, being on the computer is far from my list of priorities and this blog is one of the victims. Being unemployed was so much easier. I can’t believe there was once time to both write about Baby AND cooking. I bought an iPad to hopefully make it easier on myself but it’s spent most of its life in a bag so far. The papa blog will not be abandoned!