First off, what’s summer break? I remember it as that awesome time as a kid when I didn’t have to go to school and instead just played all day, stayed up late with friends, and enjoyed the warm weather. Turns out, that’s not at all what summer break is. What it actually is, is that time when you have to pay for childcare again, just when you were getting used to the financial break of your eldest finally entering the public school system. That, or figure out the magical solution of who’s going to watch the child all summer long. We opted for the former.

It was a hard transition, and a huge change for our little Nashi. I’m very proud of him for making it through this new big world, full of even bigger kids up to 5th grade crawling around that place. 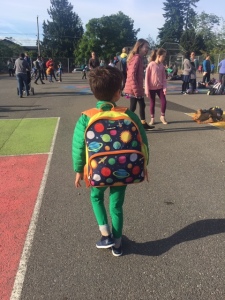 Half his days were in Japanese, and he was expected to participate in lots of structured activities. And performances! Always the performer, he enjoyed the songs, plays, and dances. 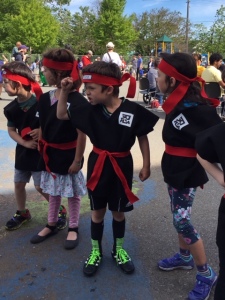 But he’s not a little kid anymore. Look no further than a convo with him in the car, late May:

Nashi: Papa, do you know the f-word?

Me: *shrivels down into a little raisin and falls out the window*

He also knows “shit,” by the way. Also, he will no longer wear anything with pink or unicorns. Dresses and tutus are a nope as well. He has learned from peers that none of those things are ok for boys. The initial transition, beginning about 6 months ago, was pretty intense. Anytime he saw something pretty that he previously liked, especially if it came in the form of a dress or skirt on a female, he would observe with a comment like “I hate that dress.” This coming from the kid that loved wearing tutus, sparkly shoes, and his favorite Wonder Woman pajamas. Clearly he was processing the newfound repression of being socialized to dislike something you actually really like. He’s at least come around now to wearing some of it again when in the privacy of his own home (and he no longer says he hates the things girls wear).

I’m proud and excited for him to experience progression in life, between Kindergarten and regular play with neighborhood kids, particularly one who’s about a year older than him whom he spends a lot of time with. But I feel like the world took away a lot of his sweetness this year, even if it’s developmentally appropriate. The completely unselfconscious young child is a precious thing indeed, and Nashi has moved past that stage. He also now does a lot of posturing about how big, tall, fast, and good at things he is.

On the other hand, I’m finding a lot of joy with the new things! He is now obsessed with soccer. The weekend practices, the driveway play, and his love of a soccer-themed Japanese show I let him watch (Captain Tsubasa) has sustained this to the point where he’s actually quite good now. This, the kid who was generally physically timid. Who couldn’t catch balls because he’d either close his eyes. step back from the ball, or both. Now he’s leaning in to my hard kicks as keeper and making stops. “Play your hardest!” He says. Only problem is he doesn’t know how to turn it off and will constantly push boundaries kicking the ball around others when he’s not supposed to.

He continues to progress with violin and even played his first solo at a recital.

It’s not easy for me to follow through on the discipline required for daily practice, and he’s usually not excited to start, but he works through it with interest and it’s not the behavioral nightmare it once was. He also loves to draw and paint, and he’s super independent. For some reason though he still often fears being in a room by himself, and finds it hard to go to his room just to retrieve some pajamas if he’s alone.

I hope he has a great summer, and I’m already in pre-shock that we’re about six weeks away from 1st grade.