We now have a three and a six year old.

Nashi is now a first grader, which to me almost sounds like a regular ol’ kid going about his childhood rather than a being a baby. Just like how he started Kindergarten, his first few weeks of first grade started with his teachers informing us of behavioral problems like yelling during story time or pushing while standing in line. Mama and I did proactively call a meeting with teachers however, so I think that helped prepare us all for it. And similar to last time, our solution is to try and help in any way we can. We give him as much patience as possible at home, Mama started taking him to occupational therapy appointments, and the teachers created a sticker chart for good behavior that leads to a reward. A few months in, I can say that things have definitely improved and we have high hopes of making it another school year without getting expelled.

He continues to be obsessed with soccer, and he’s forming more connections at school through the sport as well. Speaking of, it seems appropriate to quickly brag about my wife here. She tried to enroll him in a fall soccer league but there wasn’t any space due to a shortage of volunteer coaches. Like a hero, she swoops in and becomes a coach. The season has come and gone since my last update but she did great and Nashi loved it. He has a whole soccer gear collection now and just can’t get enough.

Coach Mama in action. Papaya likes to participate in the warm ups with gusto. Nashi hangs back, unconvinced of its value

In his other spare time he enjoys dismantling our couch cushions on a daily basis to build a fort, getting creative with Magna-Tiles, use tape to make ridiculously large paper airplanes, and generally having a hard time dealing when his sister wants to play with his creations. Lots of blocking, grabbing, threatening, and tears.

But! They are actually playing together for more extended periods of time! Still can’t let your guard down because shit can go real south real fast, but they will sometimes play a solid hour together. Sometimes I can cook a full meal undisturbed while they play. What this typically looks like when successful is them in the living room making a huge mess and doing god knows what while I cook in the kitchen, bouncing around to music by myself with a glass of wine. These are the good times. 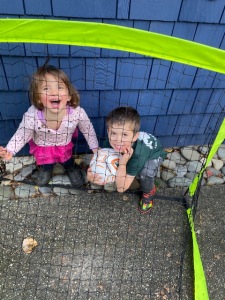 They’re at their most unified when it’s a them vs. me kind of game

Papaya has turned 3 and is quite the character. The other day, she nicely asked me for a piece of pie and it wasn’t time for dessert so I kindly said not now. To this she replied, in quickly escalating volume, “No fair, I want a pie and you’re not listening, NO FAIR I HATE YOU!”

This kind of exchange is liable to happen at any moment, depending on her question and my answer. These are the dangerous times.

She continues to inform me at least once a day that she really loves Mama, but that she doesn’t love me. She actually let it slip that she loves me just this morning though, when she was making a list of family she loved and I was totally on the list. I suspect this occurred because the emphasis of this list was to include some grandmas on the list but exclude others. So in her effort to randomly attack a few unsuspecting grandmas, she forgot that I’m her usual target in this effort. 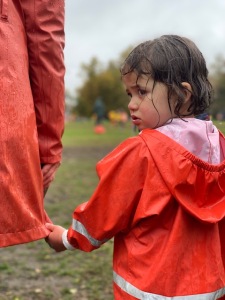 Related, the recurring game the kids play is taking turns roleplaying mama and baby. Whoever is the baby will use a baby voice and ask mama to help and the mama will tend to the baby. This game has gone on for months now, and nowhere to be found is the dad. Like he’s just completely out of the picture? What about roleplaying the Papa who makes yummy food or cleans the dishes or builds and fixes shit or brushes their teeth? Nope, this character does not exist in their world.