In what felt like an overnight change, we accidentally entered an alternate reality. 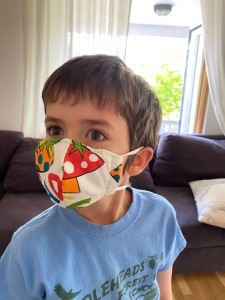 We’re three months in and haven’t found the hidden pathway back. School is cancelled (but pretending they’re not), work is remote (but luckily still happening, particularly the paychecks part), friends don’t exist anymore (except for digital facsimiles that we’re pretending are real), toilet paper inexplicably became a non-thing for 8 weeks (but my preexisting Costco habits carried our would-be dirty asses), and the potential hazards of the world forced us to save money on restaurants and coffeeshops while syphoning off the rest towards Amazon.

First it was school. As news came in that Kirkland gave us the first outbreak of COVID-19, it became a serious consideration that America would experience similar disruption to China. Considering said disruption is LIFE ALTERING, it was still extremely hard to imagine. But there we were, seeing stories of various places around Seattle popping up with cases of reported infections. Mama being high risk due to asthma, she determines on a Friday that we should keep the kids home for a few days and monitor the situation. Well, that Friday was back in February and turns out it was Nashi’s last day of first grade. The virus only continued to spread over the next couple weeks and school was eventually cancelled. First for a month, then another month, and then for the rest of the year.

Turns out, accepting the concept of a “new normal” is actually extremely important in a situation like this. In our previous reality, an unplanned five day stretch of snow days almost pushed us to give up on running a family. Now we’re at 3 months with who knows how many more to go. If we thought about this in any comparable way to how we thought about those never ending snow days from fifteen months ago, it’s possible the most humane option would’ve been to simply eat the children a few weeks in. But here we are, homeschooling, working, surviving. Dare I say thriving in a few crucial ways.

Most significant is homeschooling. In the beginning, I had a very challenging but straightforward goal: teach Nashi all the katakana characters to help him in his Japanese class. I made flash cards, found a way to gamify it in a way that motivated him, and stuck to it day after day until we completed the mission about two weeks in.

Reading him Dragon Ball, a reward he unlocked by learning katakana

As the ongoing closure of school was making it clear this may go on for a while, the katakana experience resulted in an epiphany for me as it relates to the academic and behavioral struggles Nashi had been experiencing. The epiphany was as powerful as it was completely shameful for how obvious it’s about to look written down: when my child is struggling at school, I the parent can help at home.

The Japanese continued and I added in math next. Now I’m there helping him through every minutiae of every new concept, seeing exactly what he is and is not grasping and teaching him what he needs to learn. All the time I’ve spent thus far has me wondering, how the hell was he supposed to learn all this in school as one of almost thirty kids in the class, getting hurried from one activity to the next? I’m new to being the parent of a child in elementary school, and this has been an immensely important lesson for me about the importance of really keeping up with schoolwork. Since then, Mama has joined the fun with reading and writing and we’re determined to send him back to school in much better shape.

Papaya on the other hand is far less complicated by comparison in terms of disruption. It’s a massive loss that she’s been missing out on forest school and stuck in and around the house instead, but a three year old’s world is generally smaller. Despite living in the city, we’re very fortunate to have a lot of activity zones in our home, especially when you include the driveway, backyard, and gym (garage).

They call this “gymming”

Both the kid’s schools are utilizing online meetings to stay connected. It was a fun novelty for about four minutes each. 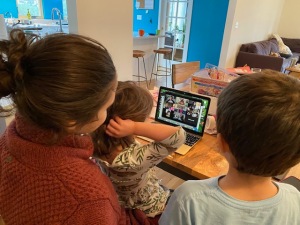 Since then, all attempts at video conferences for the kids have been unmitigated disasters. They hate it, they start acting out, and it throws off the rest of the day. It’s perhaps the most upsetting side effect of this whole pandemic and I don’t want to talk about it anymore.

So many things we do now are because of COVID-19 and it’s now in regular conversations with and between kids. They now mention “because of the virus” pretty regularly and Nashi tells visiting grandparents that they need to be six feet away. Papaya has been caught on video declaring that she likes the virus because it has meant being home with her family. For that matter, Nashi has spoken in favor as well, although for him it’s because he doesn’t have to go to school. Considering he learned how to burn things with a magnifying glass during quarantine, I suppose being at home burning shit is way more fun for a six year old boy than being lost at math in school. 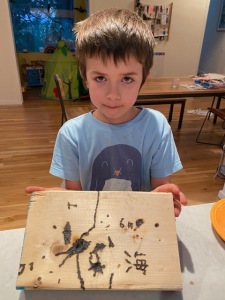 Lots of kid-isms to discuss as well, unrelated to the stupid virus, in an upcoming post where I don’t mention the (new) c-word. An au pair has joined our family and the kids continue to be ridiculous creatures in new ways!