A new and dangerous milestone. 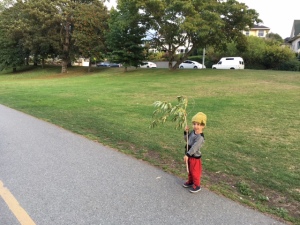 Baby now remembers things we said we’d do and holds us to it. This includes promises from previous days. I didn’t realize until now (that it’s over) our competitive advantage over him was a clean slate each time we started a new day. The other night, I told him we’d play with certain toys the following morning, and guess where he goes upon waking. He didn’t let me get away with an attempt to redirect, reminding me of our verbal contract.

This spiraled out of control last night to a category five emergency. We visited Green Lake to observe their Luminata event, one I highly recommend for kids (save for the gentle breeze of pot that gave all surrounding children their first contact high). During the performance, the host states that the parade is next and we will be walking together as a group. The performance ends, and it being 8:15pm at the time, we shall head home. We tell Baby it’s time to leave, he gets teary-eyed, says “but he said we’re going to walk in the parade next!” and begins phase one of toddler meltdown.

What? You’re going to hold us to something Luminata Dude said we’d do? Ah hell naw.

So we did what any rational parent would do in that situation: we manipulate to get what we want while Baby thinks we’re doing what he said. “Yeah, we’re going to walk in the parade, don’t worry. See, we’re in the parade!” Our car was in the same direction so we just described it differently. Problem solved. We’ll save for later the conversation about how we can’t possibly fulfill all promises made to you by strangers.

With this post, we end the period of time we’ll call We Just Have the One Kid. Little sister is very close to making her debut, so we will be upgrading to code names for both – Baby will be Nashi and little sister will be Papaya.  This has been quite the three years, and I’m terrified and excited about the next three. Papaya, we hope you’re ready to join the family!