One of the best parts about being a dad is back, and it is glorious! 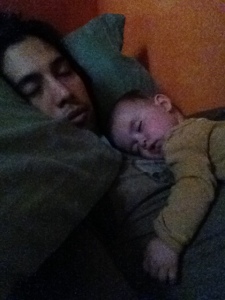 We needed to get Baby comfortable with sleeping in a crib and not be dependent on us. Not that sleep issues are resolved by any means, but the crib isn’t an inherent problem. The past couple weekends I’ve enjoyed the triumphant return of Papa Time. Best part is he sleeps nice and long on me, usually up to two hours.

He’s bigger now, and his body drapes down past my waste. It’s as sweet as I remember, and we’ve done this each weekend day for a couple weeks now. It always takes some convincing; apparently he has forgotten this ritual (and how much he loves it) but a couple minutes of rocking and he’s sound asleep. I have my phone, Kindle, or computer close by but I’ve always ended up napping with him the entire time.

Lots of other news:

– Sleep improvement! About two weeks ago he went through a stretch of several days of much better sleep at night. Like, 4 or 5 hour sleeps that made Papa worried he wasn’t breathing anymore. Mama has given him iron (after testing slightly deficient) and solid food which both helped. Sleep has regressed since, however, due to..

– Teething! His little lower baby teeth are trying to bust through, and it’s tough on the little guy. Most of his cries and whimpers are clearly due to teething pain, and I feel bad for him.

– On the move! He’s rolling over like a champ, and is able to make some progress when motivated. Still not a proper crawl, but we’ve now gotta keep an eye on him more than before, not to mention clear a wider radius of dangerous items.

– Sounds! Still no official word yet, but he’s louder and actively experimenting with sounds. Some of which are quite enunciated.

Baby also experienced his first sickness last week. Turns out it was some kind of stomach bug and the worst of it only lasted a day. He was vomiting until there was nothing left, even with bile. This happened during a weekday while I was at work. He wasn’t showing any other symptoms. My first Google search said it’s probably ok but keep a sample of the bile vomit in case things get worse and they need to test. Then I made the mistake of continuing the Google search, which led to another source telling me he needs surgery right away. This was upsetting. Mama insisted he’s okay, and since she worries more than I do about things I went with that. He was better shortly after, but still seemed sensitive to foods so we’re taking it easy for a bit.