Her coughing caused just enough discomfort in breathing to warrant a visit. 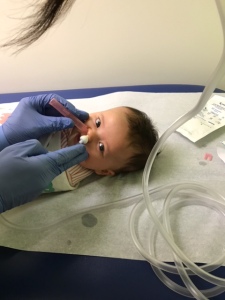 I was picking Nashi up from his grandma at the time, and it was late so I was on older brother babysitting duty. That picture is what Mama sent me. Why does such a innocent and adorable little creature need to get sick? Turns out she has RSV, which is common and probably the least scary thing to have given her symptoms. They stuck a little tube all the way up through her poor little nose, which she did not like, but evidently did a good job draining the mucus. (Mama edit: It wasn’t draining. It was SUCTION)

They sent her home shortly after, and proceeded to have a really difficult time sleeping in the first half of the night (this was two nights ago). Then she slept all day yesterday. Then last night after her latest nap, she had a fever and seemed out of it. Like, eyes rolling in the back of her head. Scary. Off to Children’s Hospital Mama goes again, and I stay home with Nashi.

More draining occurs and this time Papaya was given Tylenol. Mama says she looked better immediately. This trip was a longer one, but still came home later that night. This time slept better too. (Mama edit: she went to Urgent Care first, and was sent to their ER. Intense moment for her, even though it ended up ok)

This is how we spent our New Years Eve. Same for you?